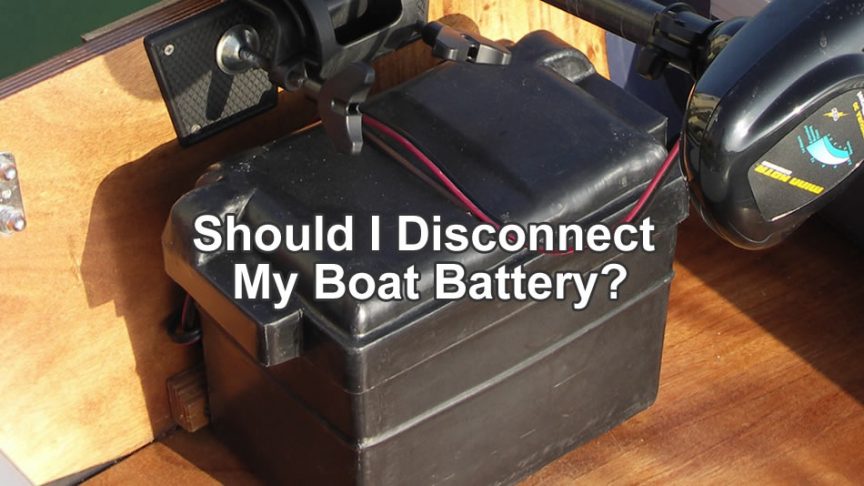 One of the questions that I have asked myself was whether or not I should be disconnecting the battery while my boat is not in use. What I found out was that, yes, you should disconnect the battery if your boat is stored on land, but if you store your boat in the water, then no. Let me explain.

Turning off the boats motor will not prevent the battery from draining. You might not be aware of it, but while your boat is turned off, your battery could still draw power from things such as the radio, bilge pump, fish finder, or even a clock. While your boat is in storage, over time, these items will slowly drain your battery, especially if the battery is wired directly to any of these objects.

As I mentioned before, there are some circumstances when you do not want to disconnect the boat, and that’s when you are storing your boat in the water. The reason for this is because you are going to want to make sure that the bilge pumps have power in case the water level rises inside the bilge. So because of that reason, you do not want to disconnect the battery. Instead, you could look at using a charger that will help keep the battery fully charged.

If you plan on storing your boat for a few weeks, disconnect the battery and make sure it has a full charge. That will allow them to sit safely for several weeks without draining. In addition to making sure the battery has a full charge, if you use a wet-cell battery, you should pop the cap on the top of the battery case and top the level with distilled water.

How to safely disconnect the battery

How to safely reconnect the battery 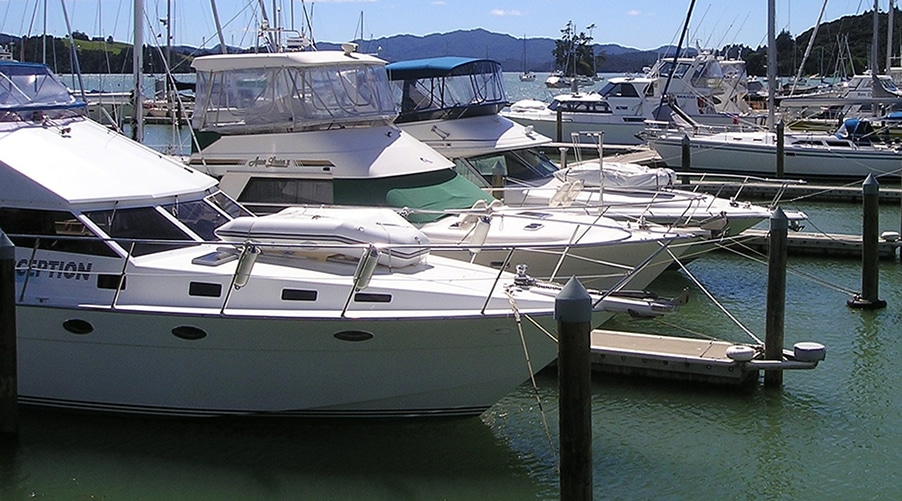 Disconnect Boat Battery in The Winter

After doing an extensive amount of research on the topic, I was able to find out that a lot of boaters have their own opinions about disconnecting a battery and what the best way is to store the battery was during the winter months.

During the winter months, it is recommended that you disconnect your battery and store it inside someplace cool and dry, like in a basement or a workshop. Marine batteries should never be left outside in the cold for too long because they can freeze. What happens is that the liquid inside will freeze and cause the electrical connections to break and bend the plates, which will lower the batteries’ output. Sometimes to the point where the battery is considered useless.

Long ago, it was said that storing a battery on a concrete floor would drain it quickly and cause it to lose its charge. That was true when battery cases were made out of natural rubber, but that’s no longer the way it is today. Now, battery cases are made from polypropylene or other more modern materials, allowing the battery to be stored almost anywhere.

Some long-time boaters think that it is better for the battery now if it sits directly on a cold floor to help it hold its charge. Although that’s just a theory, and I couldn’t find any evidence to support it. 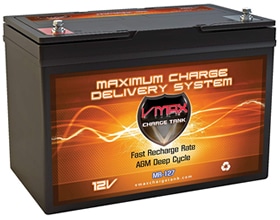 Now, before you store your battery, it is important to understand if you have a wet-cell, gel cell or an absorbed glass mat (AGM) battery. For example, storing a wet-cell battery with a low charge could cause the lead sulfate to form crystals, which is hard for the battery to convert back into lead and sulphuric acid during the charging phase.

Gel cell and absorbed glass mat batteries, on the other hand, are a little easier to take care of. For instance, you don’t have to worry about topping these up with distilled water since they do not require it. These two types of batteries tend to cost more than a wet-cell battery, but they don’t sulfate or degrade as easily as a wet-cell, and they typically hold a charge longer.

If fully charged, these two types of batteries can sit for several months in a basement without losing too much of their charge. Although they shouldn’t require a trickle charger, periodically throughout the winter, you should check on them and make sure they still have a charge above 80%. Don’t let them drop below that.

Now, for some people, it might not be an option to remove the battery from the boat, either because the battery is too heavy, or they don’t have anywhere inside to store it. If you need to, you could store a battery on the boat during the winter as long as the battery is fully charged and hooked up to a reliable “maintainer” type charger.

Be aware; if you choose to store your boat outdoors at a marina, some marinas might not allow you to connect your battery to a trickle charge. In fact, in some incidences, this might even void your boat insurance.

Although the winter months typically have less sunshine, you could look at using a solar panel to help keep the charge in the battery.

Recommendations Before Storing a Battery

Take a look at the battery for any signs of damage, such as a crack, or any corrosion. On a wet-cell battery, open the top and check the level of electrolyte. If necessary, top this up with distilled water.

As silly as it sounds, a dirty battery could often dis-charge fairly quickly. Use a clean cloth to wipe the battery down and remove any dirt. Use a mixture of baking soda and water to clean the negative and positive terminals to get them completely clean.

While storing the battery, it is a good idea to monitor the health of the battery every 4 to 6 weeks to make sure that it is still holding a full charge.

Should I Leave My Boat Battery Charger On All The Time?

When it comes to leaving your battery charger plugged in all the time, it all comes down to what type of charger you have. For example, there are 3 stage and 4 stage chargers (“smart chargers”) that have a built-in microprocessor that monitors the charge in the battery and automatically shuts itself off when the battery reaches a full charged.

There are also 1 and 2 stage chargers that shouldn’t be left on for a long period. Usually, people who own these types of chargers will plug their battery in and fully charge it. Once the battery is fully charged they will unplug it. Then the day before they plan on heading out with the boat, they’ll plug the charger back in to top the battery back up again.

The problem with leaving your battery charger plugged in for a long period if it doesn’t have an auto-shutoff function is that it could dry up the battery cells and when that happens, you run the risk of overheating, which could lead to a fire if left too long.

If you store your boat on land or a lift just out of the water, you generally don’t need to keep your battery plugged into a charger all of the time. Unless you live several hours away from where you store the boat, and you leave the boat for a few weeks at a time. In which case, you could always take the battery home with you to make sure it stays charged.

Usually, it might make more sense to keep your boat battery charger going all of the time if your boat is stored on the water so that your bilge pumps can still work. In which case you should probably opt-in spending a little extra money and buying a four-stage charger.

BMK makes a very nice smart charger that has been working great for me so far. You can buy them from Amazon for $35.99. Click here for the current price. 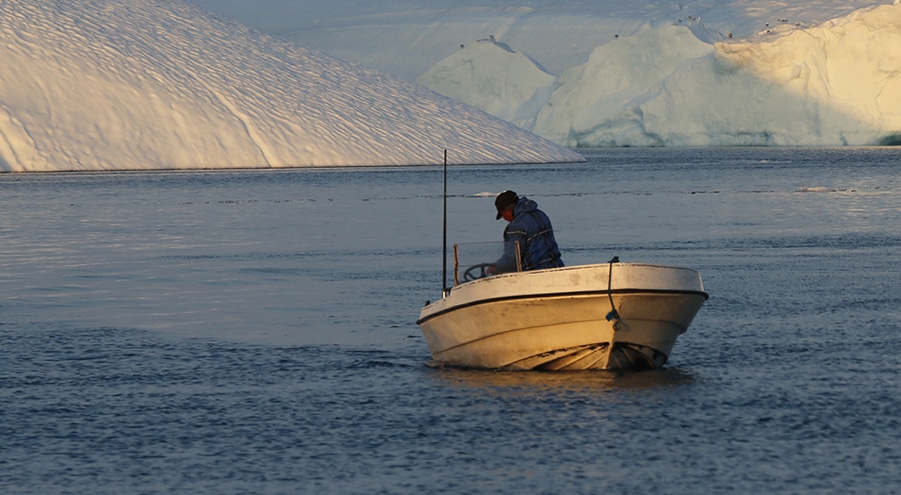 Can a Marine Battery Freeze?

Yes, marine batteries can freeze if it gets cold enough. Usually, a fully charged lead-acid battery could withstand temperatures of -70°F before freezing, while a discharged battery of 80% or less could begin to freeze around -30°F temperatures.

If your battery is frozen, do not attempt to charge or jump-start the battery until it has had time to thaw out first.

How Long Can a Marine Battery Be Stored?

If you plan on storing your battery for a long period, a properly maintained marine lead-acid battery could last for up to 2 years.

Now, before you store the battery, you will need to make sure of the following:

Can a Boat Battery Freeze

Why Your Boat Battery Keeps Dying And What You Can Do

Everything You Need To Know For Winterizing a Boat

Can a Boat Battery Get Wet

Will My Boat Engine Freeze – Everything I Have Learned

This website is owned and operated by Speanut. Speanut is a participant in the Amazon Services LLC Associates Program, an affiliate advertising program designed to provide a means for sites to earn advertising fees by advertising and linking to Amazon.com. As an Amazon Associate, I earn from qualifying purchases. Speanut also participates in affiliate programs with Clickbank, CJ, and other sites.