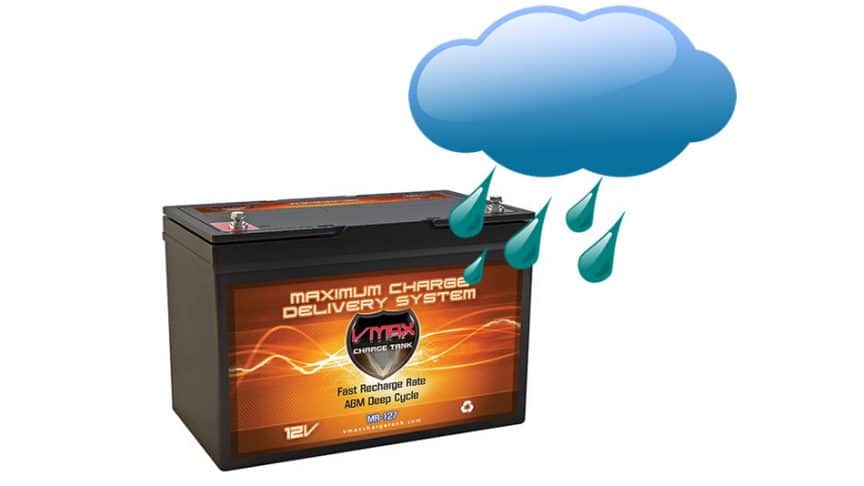 I was sitting here thinking about my batteries that I have stored on my basement floor for the winter and it got me wondering if the batteries could get wet if my sump pump stopped working and the basement flooded.

After a couple of hours researching the topic and reading through a bunch of forums I was able to find out that marine batteries can get wet, but you should dry the housing and terminals right away. You also don’t want to submerge the battery in water, especially in salt water, because salt water conducts electricity and it will drain the batteries quicker.

Batteries have a plastic casing that contains the acid from being able to escape. This same casing can prevent water from getting in, although that is not what the housing is meant to do. A battery that is only submerged halfway in saltwater can still slowly drain its charge.

Ideally, you want to keep your batter in a nice dry space, but if your battery is getting splashed and water is rolling off of it, the battery should have no problems. The terminals on the top getting wet are what you should be worried about. As long as the top area of the battery is not exposed to water for too long, and the water that is on the top gets dried up fairly quickly, it should be okay.

What Happens If You Get a Battery Wet

Generally speaking, a little bit of water is never going to be a problem, just as long as you get the top dried up quickly before the water starts to corrode the terminals and housing. Also as mentioned earlier, saltwater conducts electricity, and once the saltwater is exposed to the battery, that will begin to drain its charge.

Even a little bit of saltwater on the top of the battery, sitting between the terminals will drain the battery quicker. A drained battery is something you don’t want if you are far from land.

Freshwater, on the other hand, doesn’t have the same effects as saltwater does on marine batteries. There is some conductive action, but it is not all that much. All water is corrosive, so, therefore, you do not want to leave the top of the battery wet where the terminals and housing are located. The water will begin to erode the metal parts.

Can a Battery in The Water Electrocute You?

After doing some research on this, I was able to find out that a single 12-volt battery in the water can not electrocute you. A typical marine battery is measured in voltage and carries an average voltage of 12V, which can vary a little depending on the level of charge in the battery.

However, if you and the battery are in the water together and you grab hold of each terminal, you will get a small electric shock. Nothing close to being able to electrocute you.

Depending on the circumstances and the individual in question, if you were to touch the battery up to your chest while in the water you could give your heart a little shock which could have a fatal reaction. Although it is said that even this shock would still not be powerful enough to do anything, I personally still wouldn’t want to test this theory on myself.

The answer to this question is both Yes and No. Let me explain. If a dry person were to get zapped with 120 Volts, alone this would give that person a nice electrical shock because the human skin gives off quite a bit of resistance.

Now if your skin is wet for whatever reason, the skin’s electronically resistance drops down dramatically allowing for a higher current to flow through your body. That higher amount of current could kill a person.

When Can a Marine Battery Harm You?

As mentioned before, a single marine battery cannot give you an electrical shock by grabbing the terminals with your bare hands, due to the low voltage. But you can receive a nasty shock from other electrical systems running on the battery.

For example, an ignition system which uses a cap and rotor, the ignition coil requires a massive amount of voltage to push a spark across the little air gap of a spark plug. By touching the battery terminals ground, and holding onto the coil wire with frayed insulation, will give you nice zapping shock.

The reason why you can get shocked in this scenario is that the voltage that is pumped out of the battery by the ignition coil is high enough to push through the resistance of your skin. Now, this shock probably still won’t be enough to kill a person it is defiantly strong enough to get somebody’s attention.

Here are a few other ways that a marine battery could be harmful:

How To Remove and Prevent Battery Terminals From Corrosion 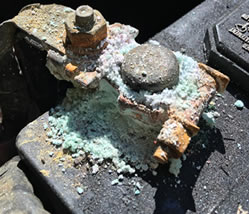 Over time you might start to see some corrosion damage on your marine batteries. The corrosion is caused when a little bit of acid leaks slowly from the terminal. When the battery terminals have corrosion that will cause the battery not to work properly, and it won’t be able to hold a full charge or the charge drains quicker then it should.

The good news is that you can clean off any corrosion damage and apply petroleum jelly to help prevent or at least slow down the corrosion from coming back. Marine batteries contain sulfuric acid which is highly caustic, so whenever you are working with a battery, you should be wearing protective gloves and goggles.

Step 1 – Remove the battery cables from the battery terminals. If there is a lot of corrosion, you might need to use some vice grips to wiggle them free. Always remove the cable clamp from the negative terminal first.

Step 2 – In a disposable plastic cup, make up a mixture of 3/4 cup baking soda, and 2 1/2 cups of clean, warm water. Use a wire brush and the mix to scrub the corrosion off all around the terminals and clamps.

Step 3 – Use a clean, disposable, lint-free rag to thoroughly wipe all around the terminals and clamps to completely dry them.

Step 4 – Take some grease or petroleum jelly and smear it on the posts, battery cables, and clamps. The petroleum jelly will slow down any further formation of corrosive deposits. A recommended anti-corrosion gel is the WirthCo 16204 E2000 from Amazon for $18.95. Click here for the current price.

Step 6 – Check the batteries water level, and if necessary, refill using distilled water only. Tap water will corrode the terminals. Repeat this every three months.

Should I Disconnect My Boat Battery

Why Your Boat Battery Keeps Dying and What You Can Do

This website is owned and operated by Speanut. Speanut is a participant in the Amazon Services LLC Associates Program, an affiliate advertising program designed to provide a means for sites to earn advertising fees by advertising and linking to Amazon.com. As an Amazon Associate, I earn from qualifying purchases. Speanut also participates in affiliate programs with Clickbank, CJ, and other sites.